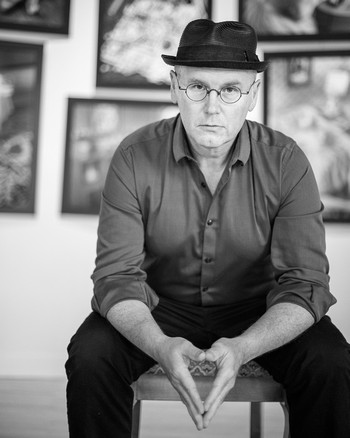 For Chicago artist Newbold Bohemia, an image is not captured in an instant, it is cultivated over time. While other artists exploit the documentary nature of photography, Newbold subverts reality by creating falsified and forged documents. His images are openly staged and/or manipulated after being captured. He builds sets and costumes to create narrative tableaux, stages mundane objects to create transformative still-life compositions, manipulates photos both digitally and physically, and combines found images in ways that either highlight or subvert the intended messages of the original photos.

“Photos are just a material like paint, wood, or clay,” says Newbold. “I plan, create, and capture images in my studio or in the field. I color them, paint them, cut them, and combine them — either physically or digitally — to create something new. I try to create not only an image, but an entire world within my image,” explains Newbold, “a world that is fictional but hopefully truthful. As Emerson said, ‘Fiction reveals truth that reality obscures.’ ”